ARIZA and the roots of brogue

The full, the half, and the Rubirosa’s signature.

In both Gaelic and Scottish the word bróg means “shoe”, but Scots word brogue is also used to denote a bradawl, as well as the action of piercing with such a tool.

In fact, modern brogues originated from a rudimentary shoe that was used in the Irish and Scottish countryside and used to have holes in it. It is believed that the original holes’ purpose was to allow water to flow through when the wearer crossed wet terrain such as a bog. 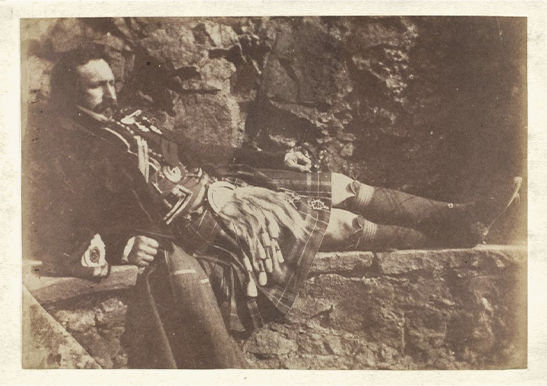 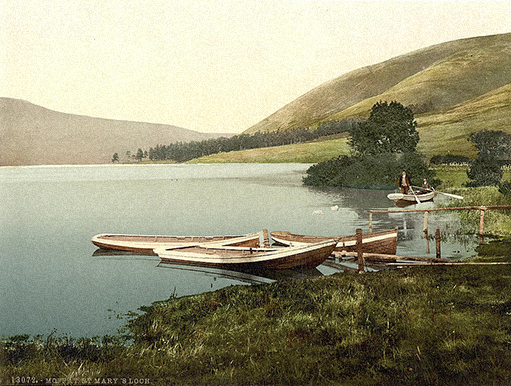 Around 1650 circa Irish landowners started to decorate their shoes with a patterned sequence of holes that included coded symbols for good luck. As soon as the style became associated with the gentry, the holes became more and more a decorative feature, until they totally lost their original purpose and leather uppers were rubbed with melted candle wax to improve waterproofing.

Brogues increased their popularity throughout the Eighteenth and Nineteenth centuries, among both men and women in the Irish and Scottish upper class, who wore their brogues with a fringed tongue. They were traditionally brown, with black brogues kept strictly for formal dress occasions only.

The Scottish lairds used to wear “ghillie” brogues with the laces that fastened the shoes wrap around the leg above the ankle and tie below the calf to facilitate keeping the tie clear of mud. Nowadays ghillies are still a component of traditional, formal Scottish dress and are worn primarily for social occasions. 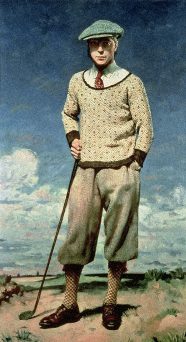 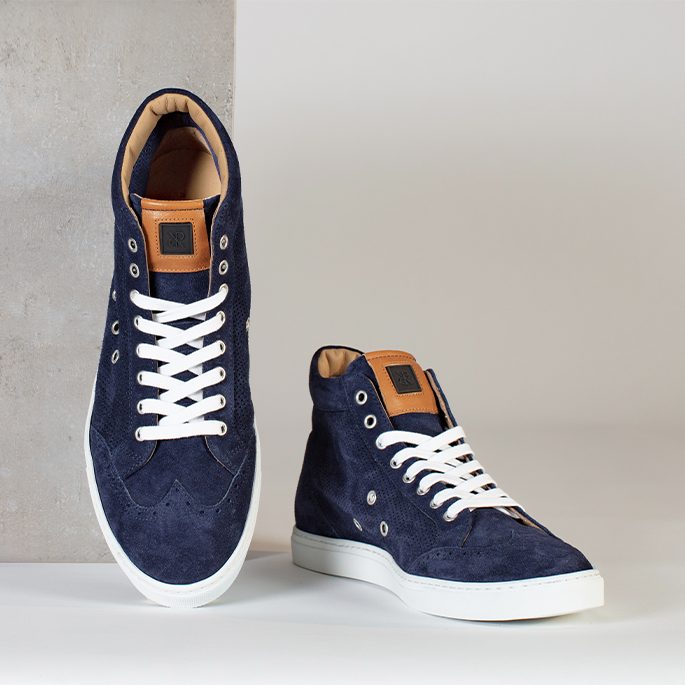 At the turn of the Twenties century, the English Style adopted the brogue as well and soon the fashion crossed the Atlantic. It was still considered to be an outdoor, country walking shoe though, and was not appropriate for social or business occasions.

In the 1920s the style grew increasingly elegant and became associated with sport, which at that time was almost exclusively an upper-class occupation. Its apotheosis was reached in the 1930s when the world’s arbiter of fashion the Prince of Wales wore it as a golfing shoe and in a lighter form in suede with a grey lounge suit.

The shoe became known as “the spectator” when constructed in two coloured leathers and it was the favourite among the fashion-conscious during the Jazz era, becoming a sort of a “uniform” among international playboys. Silver screen stars such as Fred Astaire and Gene Kelly wore the highbred brogues in many of their famous dance routines.

In the ’50 a young Elvis Presley rocked the stage wearing “saddle” shoes, a variation of the brogue made from white buckskin with a black or brown leather instep. The brogues become popular among boys and girls, who wore them with bobby socks. 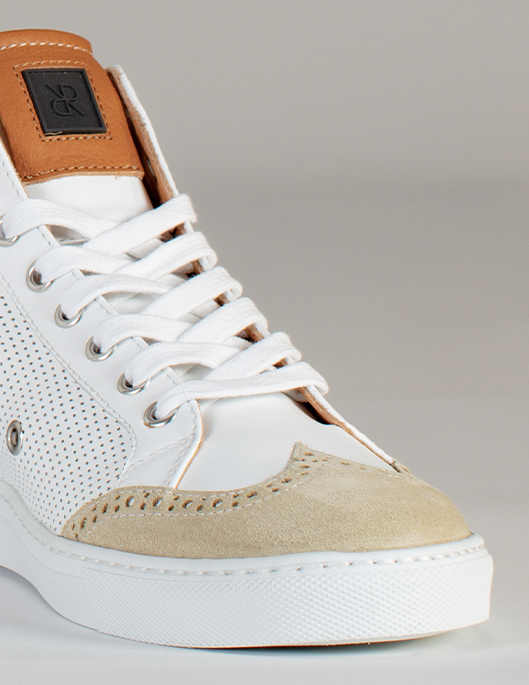 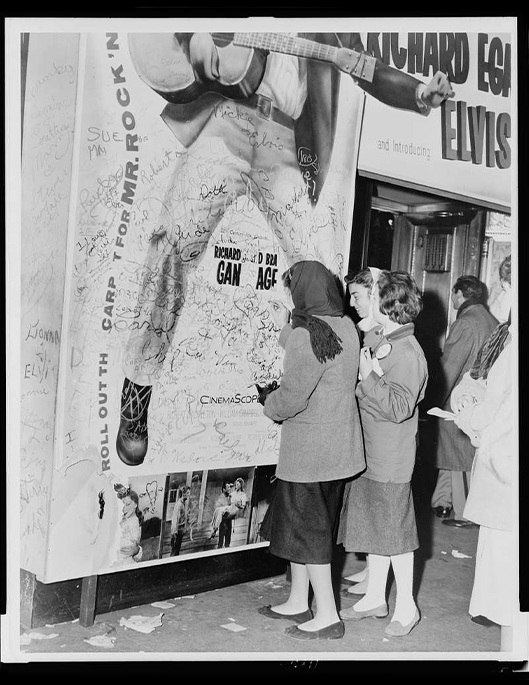 The brogue styles are determined by the shape of the toe cap and include the full brogue, semi-brogue, quarter brogue, and the longwing brogue style.

Full brogues (also known as wingtips) – Pointed toe cap with extensions that run along both sides of the toe, terminating near the ball of the foot. Viewed from the top, this toe cap style is “W” shaped and looks similar to a bird with extended wings. The toe cap includes additional decorative perforations in the center.

Longwing brogues (Derby style shoes) – Pointed toe cap with wings that extend the full length of the shoe, meeting at a center seam at the heel. This style was most popular in the US during the 1970s. 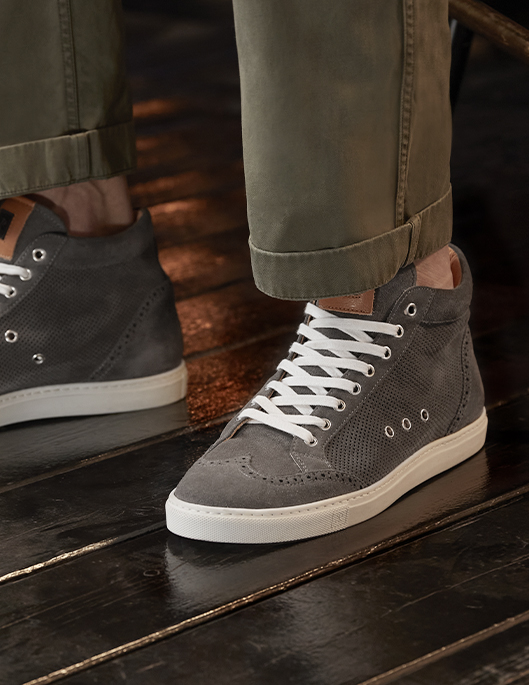 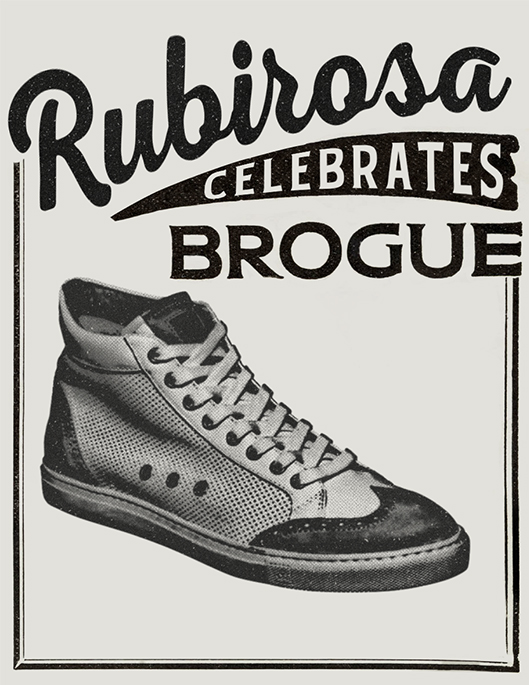 SS2021 Ariza adopts the signature Rubirosa brogue, with additional perforations running through the whole uppers of the shoe in order to give it more breathability and comfort during the hot season. Although a true mid-top style, it is detailed in lighter weight materials for this delivery.

These sneakers are in fact “deconstructed” using unlined suede uppers or lightweight leather and suede trim. The sneakers are unlined inside and reinforced with vegetable tanned calf leather where necessary.

SS2021 Ariza is lightweight, flexible, and comfortable with its iconic low cup sole. 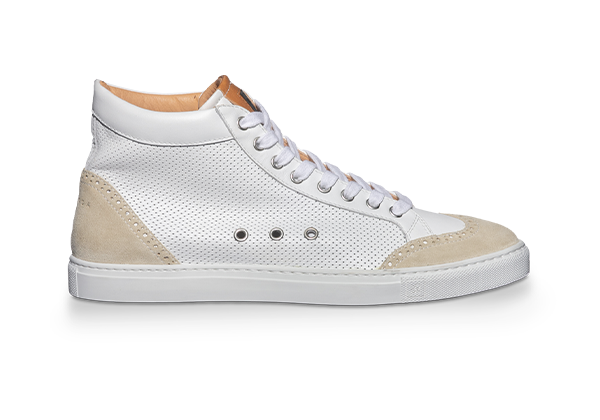 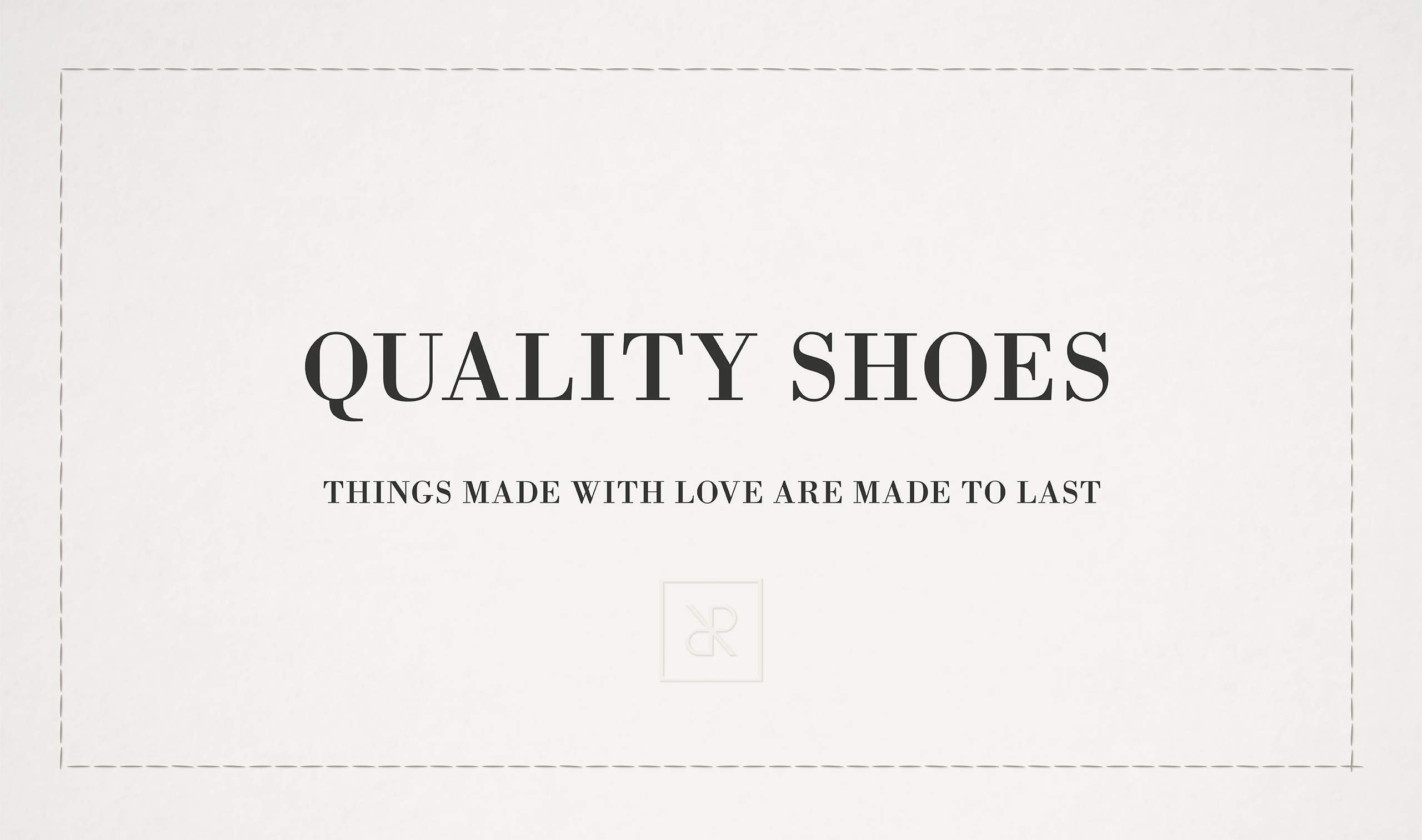 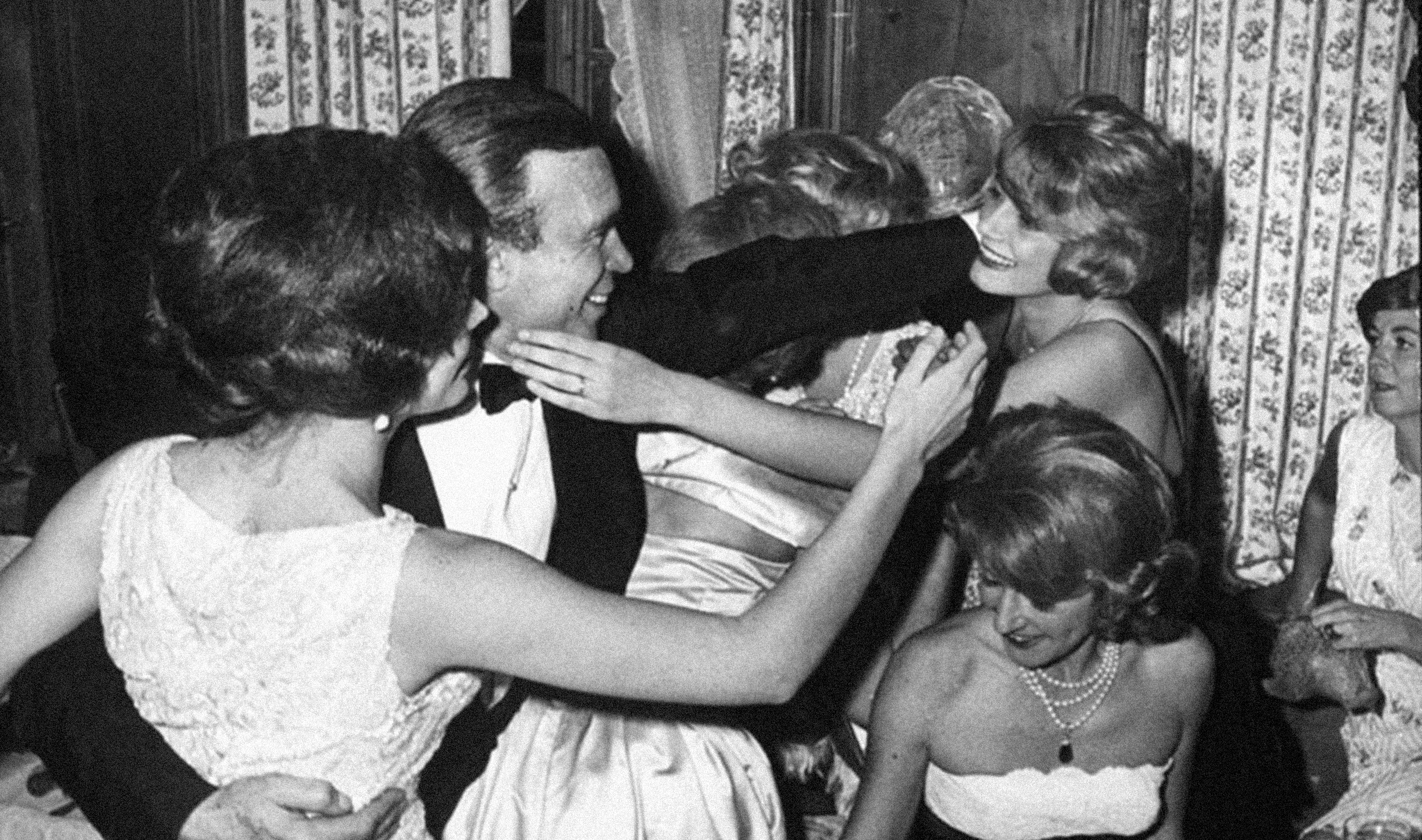 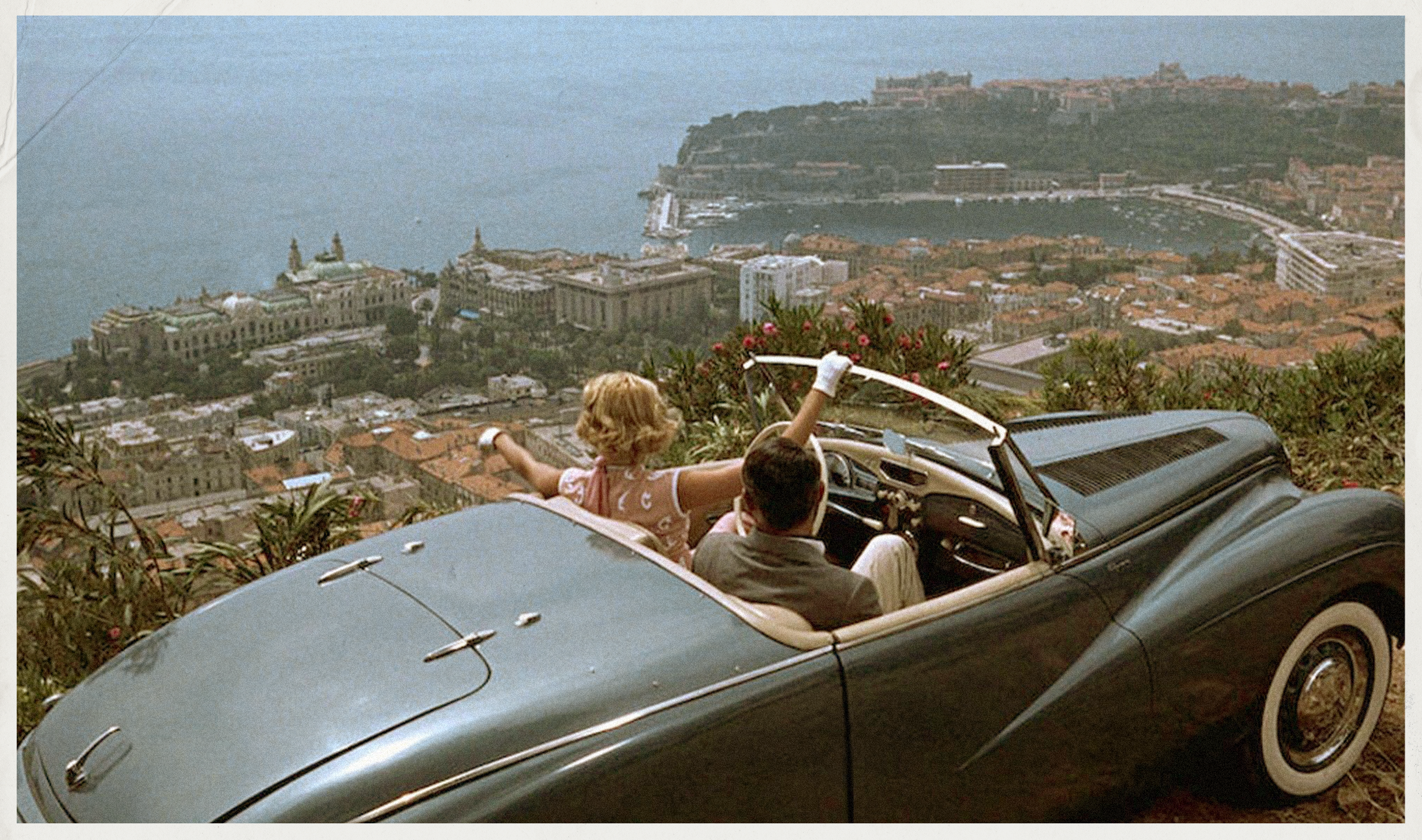